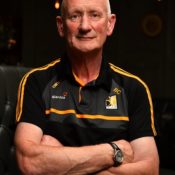 Brian Cody’s name is now synonymous with hurling greatness. Brian has managed of the Kilkenny Senior hurling team since 1998 and is now in his unprecedented 22nd year as manager.

Brian was himself a player and enjoyed All-Ireland successes at colleges level, as captain with St Kieran’s College, while simultaneously enjoying championship successes at underage levels with his club James Stephens. Brian also holds three All-Ireland medals as a player along with Club, Country, Minors and U-21 All-Ireland’s medals.

In his role as manager Brian has led Kilkenny teams through a period of unparalleled success winning 42 major honours which include eleven All-Ireland Championships, among these a record-equalling four-in-a-row between 2006 and 2009 and an unprecedented eight out of 10 contested finals, fifteen Leinster Championships, nine National Leagues, including five league championship doubles and seven Walsh cups.

Brian spent a lifetime in the education sphere as a teacher and then Principal of St Patrick’s Boys NS in Kilkenny.