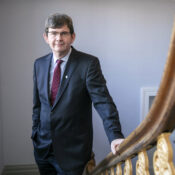 Professor Mark Rogers is  Acting President of UCD.  He was Registrar and Deputy President from July 2014 until March 2022 and Dean of Science from June 2007 until August 2011. He graduated from Trinity College Dublin with a first-class honours degree in genetics and completed a PhD in genetics at the University of Glasgow. Awarded fellowships from the European Molecular Biology Organization (EMBO) and the John Douglas French Foundation for Alzheimer’s Research, he spent five years in as a researcher in prion diseases in the Laboratory of Nobel Laureate Professor Stanley Prusiner.

Professor Rogers’ research is in the field of scrapie in sheep and Bovine Spongiform Encephalopathy (BSE) in cattle. He successfully licensed immunodiagnostic technologies that have been employed in BSE diagnosis, resulting in over €2 million in royalties accruing to UCD.

With over twenty years teaching experience at all levels from undergraduate to PhD supervision, Professor Rogers strongly promotes a student-centred and student-led approach to education that encourages independent learning. During his term as Dean of Science, significant changes were introduced to the Science programme, including a revised structure and new approaches to assessment.  He led student recruitment efforts to engage second-level students with science, resulting in year-on-year increasing demand for places on UCD’s Science programmes.

During his time as Registrar, Professor Rogers implemented strategic changes in curriculum design, including assessment practices.  He refined UCD ‘entry and selection’ processes, led a major review of academic regulations ensuring students gain the skills required to succeed in a globally connected world. He was also responsible for the transformation of access and widening participation in the University, promoting an ethos of mainstreaming supports and a university-wide approach to universal design. He is a strong proponent of wider reform of alternative entry routes and pathways to higher education.

The organisers of Education Buildings Ireland (Step Connect2 Ltd) do not, under any circumstances make attendee data available to third parties for resale.
Should you receive an email offering data purporting to be from Education Buildings Ireland – or any other event organised by Step Connect2 Ltd – please delete the message, block the sender, and do not respond or interact in any way.