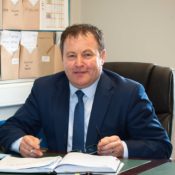 Pat is currently the Principal of St Angela’s College and was appointed to this position in October, 2011. Since his appointment he has been directly involved and instrumental in school’s building programme, which included the decant of the entire school to temporary accommodation in 2014 and the refurbishment of listed buildings and the construction of new buildings on the original school site on St Patrick’ Hill.

Prior to his appointment as Principal, Pat was seconded for 5 years to the Department of Education and Skills.  He became Assistant National Co-ordinator for the implementation of Technology subjects, he oversaw the implementation of new Leaving Certificate syllabuses, such as Technology and Design and Communication Graphics, and also coordinated the national roll of teacher CPD to support the new syllabuses. During this time, he was a member of the team that co-ordinated the national procurement process which led to a €10 million investment in ICT across the technology subjects.

Pat is also a Chief Advising Examiner with the State Examinations Commission, with direct responsibility for the monitoring and correcting the work of 6500 students at Leaving Certificate.