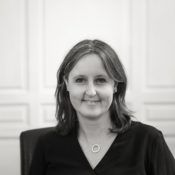 Ruth O’Herlihy studied architecture in UCD, graduating in 1997. She studied in Europe including a period of working and travelling in Italy, where she studied the works of Carlo Scarpa during an internship in the studio of Sergio Los, long-time collaborator with Scarpa. Other placements followed in Germany and in The Netherlands where she worked with Wiel Arets. Following graduation she worked in OPW before joining McCullough Mulvin Architects in 1999, becoming a Director in 2006. Along with the team, Ruth has worked on numerous award-winning buildings in Ireland as well as currently leading the team with Valerie Mulvin on Thapar University in India. She lead the Schools Bundle 3 PPP which was won with BAM contractors and is currently the Director in charge on St Davids Secondary School in Greystones, due to go on site this year. Ruth has lectured on the work of the practice in Ireland, Poland, UK, Scotland, Czech Republic, Newfoundland, Tenerife and India. She has been involved in teaching at the Department of Architecture, University College Dublin, Dublin School of Architecture TUD, Queens University, Belfast, School of Architecture University of Limerick (where she is currently one of the external examiners) and at the University of Dundee. She is currently a Design Fellow at UCD and examines on the Professional Practice Diploma course. Ruth lives with her family in a modernist house designed by her grandparents.